Skip to contentSkip to navigation 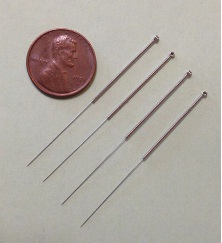 In recent years, there has been an increasing interest in alternative solutions to medical problems. People have become increasingly aware of the side effects of pharmaceuticals.

It is interesting to note that many of these new treatment methods are actually several years, if not centuries, old. One of them is the well known medical procedure of acupuncture that originates from ancient China.

It is One of the Oldest Medical Procedures Known

Everyone is aware that acupuncture is old, but few seem to grasp exactly how ancient it really is. The first traces of this medical procedure can be dated all the way back to 4000 years ago; which is even older than the Roman Empire.

What makes acupuncture even more remarkable is comparing it to all the other old medical practices that were employed back then. These older methods were absolutely pointless and could not cure anyone. But acupuncture was able to achieve genuine results among all the faulty methods.

Here are some interesting facts from the history of this revered science. Unlike many other ancient healing methods, acupuncture actually works and is recognized by the World Health Organization today as a legitimate medical practice.

A Reporter Brought It to the West

New York Times columnist, James B. Reston, is credited with being the person who brought acupuncture to the West’s attention. He was a part of the advanced journalistic team visiting China in preparation for President Nixon’s historic 1971 visit.

During this tour, he suffered from a severe case of appendicitis. Chinese doctors used acupuncture as a part of his treatment procedure. Reston was immediately enamored with this science. He used his position as a reporter for the prestigious New York Times to bring it to the West’s Attention.

Needles Were Not Always Made of Steel

Acupuncture needles were not always made of spotless stainless steel. In ancient China, the quality of the acupuncture treatment essentially depended on your socio-economic status. Needles were made from everything; gold and bronze to bone and bamboo.

Of course, proper sanitary conditions were typically not followed and hence, some of the effects of this art were diminished.

Modern acupuncture treatments combine the knowledge that Western researchers have gathered with this old Eastern medical procedure. This ensures that the needles are always in pristine condition, which optimizes the final results of the treatment.

An experienced acupuncturist can deliver far greater results than a novice one. Dr. Barry S. Greenberg has been serving the people of Florida for 28 years.

The Palmetto acupuncture doctor has the necessary expertise as an acupuncturist to cure a long list of ailments. If you need acupuncture in Bradenton, FL, call 941-749-1807tobook an appointment.

Skip back to navigation